BUFFALO – February 24, 2018 – Members of the labor and civil rights movement mobilized for a rally on Saturday, February 24th to demand an end to the rigged economic and political system. Hundreds of demonstrators spoke out in front of the Federal Courthouse in Downtown Buffalo for the “Working People’s Day of Action,” as the US Supreme Court is expected to hear Janus v. AFSCME Council 31, a case that would rig the system even more against working people by taking away their freedom to have strong unions and their right to have a voice on the job.

“Too many in Buffalo and Western New York are working harder and longer for less. A handful of corporate elites, divisive extremists and corrupt politicians are rigging the rules and our economy in their favor,” said Richard Bartolotta, a blue-collar worker at the City of Buffalo. “If the Court sides with them, they would tilt the system even more against working people and weaken our ability to stick together in unions to make progress.”

“Beyond better pay and benefits, being part of a union means you’re part of a movement that’s fighting to achieve justice and opportunity for all,” said Richard Lipsitz, President of WNY Area Labor Federation, AFL-CIO. He added, “No matter what happens, no matter who tries to divide us and get in the way of us achieving a decent living for ourselves and our families, working people will remain united.” 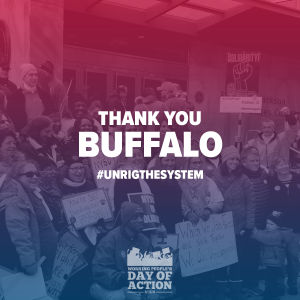 Buffalo’s rally is part of a nationwide day of action spanning 27 cities across the country. Local working people, elected officials and community leaders joined the call to end policies that benefit only the wealthy and powerful few at the expense of everyone else. It builds on the legacy of Dr. Martin Luther King Jr., who 50 years ago supported striking sanitation workers in Memphis, Tennessee, in their demand to join together in a strong union and to be treated with dignity at work.

“The faith community remains united with working people and Western New Yorkers of all races and backgrounds to demand an end to an economy that’s rigged against us. We will rise to defend the freedoms that Dr. King fought and died for, like the freedom from want, the freedom from hate, the freedom to vote, and the freedom to join together in strong unions,” said Rev. Mark Blue, President of the Buffalo Branch of the NAACP. “We have a duty to pick up the mantle that Reverend Dr. King left and build a loving, moral army to bend the arc towards justice.”

50 years after this monumental strike, working people across all communities and backgrounds continue to struggle for better pay, benefits, and working conditions. Protesters were joined in solidarity by elected officials, including Congressman Brian Higgins.

“All across the country, workers, parents, and students are gathering to say enough. The attacks on our civil liberties, our social justice and our paychecks have gone on for too long. Buffalo is just one of many cities to stand up in the face of the constant attacks against working men and women,” said Terry Melvin, Secretary-Treasurer of the New York State AFL-CIO.

Workers and their allies will remain committed to fighting against economic inequality and political exclusion. The Working People’s Day of Action is one in a series of events that will commemorate the 50th anniversary of the Memphis Sanitation Workers’ Strike while bringing attention to the present state of American workers.