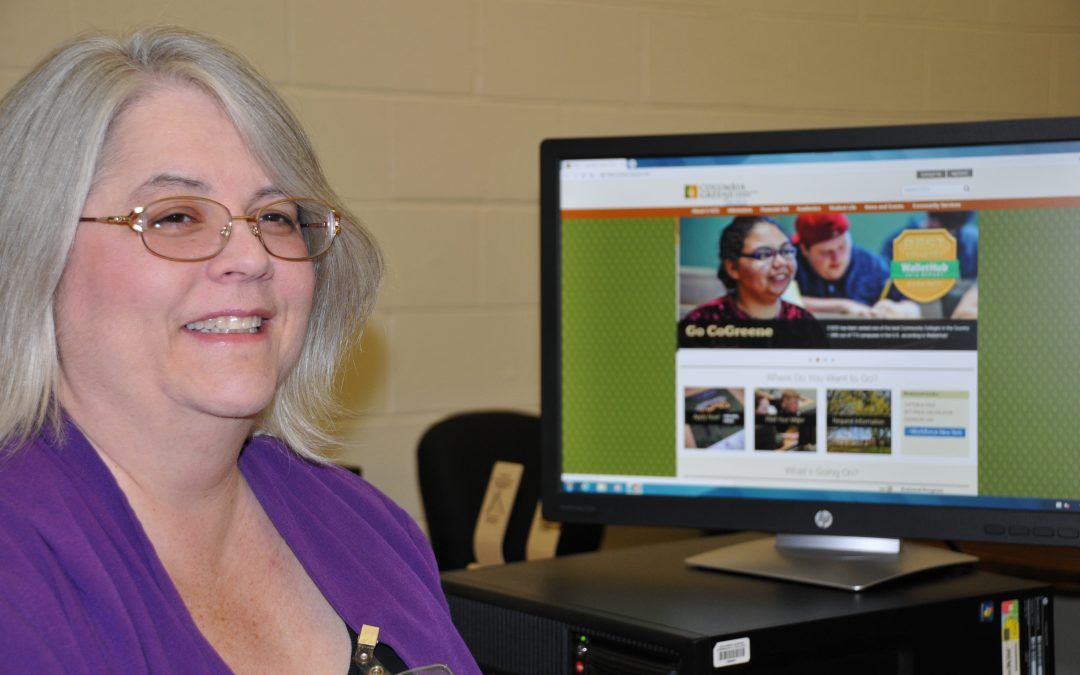 HUDSON – August 30, 2019 – It’s the Friday before the Fall Semester starts at Columbia-Greene Community College (CGCC). Staff are busy getting everything ready for incoming students, and Terri Bellanger is there to make sure everyone has access to the information they need.

Terri is a Webmaster Programmer for CGCC. In this role, she keeps the College website usable and up-to-date, and she programs administrative software. She also puts together the college catalog, which includes course descriptions and college policies, and she proofreads the student handbook. In short, Terri likes being a reliable source of information for her colleagues and students.

“Columbia-Greene has a very family feel to it because I am with people I’ve grown with in my position. It’s just enjoyable to be here. It’s a really great place to work, and I like the work that I do.” she said. Terri has been employed at the College since 1990.

And the work that she does is vital for students. “Making sure that the College’s information is online and easily accessible is very important. Not just because the law requires it, but because that’s how everyone gets answers these days,” Terri explained.

She is also the President of AFSCME Local 3662, our union of over 40 workers at Columbia-Greene Community College. However, she was not enthusiastic about joining the Union when she first started working there.

Terri described her reaction: “I was miffed. I saw that unions have their uses, but I didn’t know if I wanted to pay dues. But I got involved early on. As I got more involved, I saw how the Union fought for our benefits and kept them, making sure that everyone is treated fairly.”

“I attended a meeting when I first started. As a surprise, I nominated one of my coworkers for a union position. Then she turned around and nominated me to be shop steward!” Terri chuckled as she told the story of how she became a shop steward.

She has learned from experience that involvement with the Union gives her the opportunity to fight for her coworkers and solve issues on campus.

“In particular today, there is a great deal of pressure on public institutions to cut costs,” she said. “We’re in a service industry where we rely on people – those cuts shouldn’t fall on employees. It’s important to have a strong Union to make sure people are treated fairly.”

“Like many higher ed institutions in New York and across the country, enrollment is an ongoing challenge for us.” Terri described a major issue she and her colleagues are facing at Columbia-Greene. “There are things we will be asked to do to cut costs, so our union will be a big part of finding solutions that don’t risk harming employees. It is something where we’re going to have to come together – management and the Union.”

She summed up the work she does at CGCC, “It’s important because education is very important. An educated society is just a better society for everyone.”

And by staying active in the Union and working to resolve problems, Terri and her union colleagues make sure that they have a strong voice on campus.