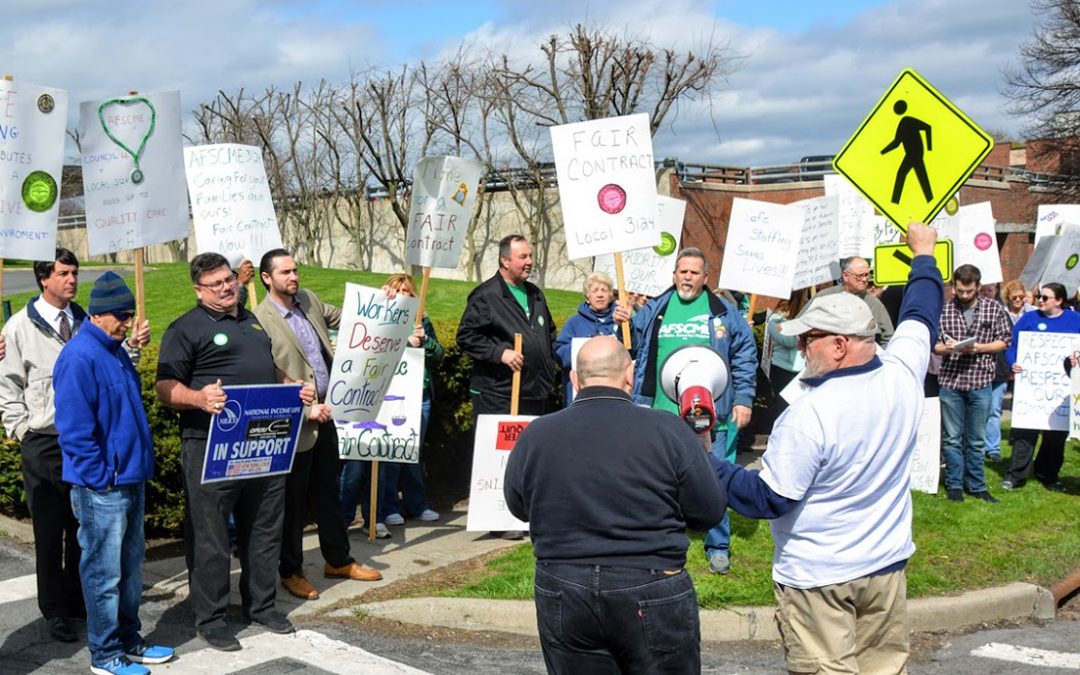 AUBURN – April 24, 2019 – The members of AFSCME Local 3124 demanded a fair contract now at an informational picket and rally outside of Auburn Community Hospital. Over a hundred workers and supporters publicly called for fair wages, decent benefits, and more staffing at ACH.

Maureen Coleman, President of AFSCME Local 3124, said, “We work hard every day to provide the highest quality of care for our patients. Despite the mismanagement at the top of ACH, the people of this community know that we – the rank-and-file employees – do our jobs well and we deserve to be treated fairly by our employer.”

Members of AFSCME Local 3124 rally for a fair contract

“We’re calling on the Hospital to immediately begin the process of hiring more long-term care staff. Workers at the Finger Lakes Center for Living are being forced to work dangerously long hours because of short-staffing,” Coleman continued. “We’re demanding what we deserve: fair wages, decent benefits, and much less mandatory overtime. Respect starts with a fair contract now.”

Earlier this year, management unilaterally changed the terms and conditions of employment after the contract expired. On the day the contract lapsed, the Hospital gutted workers’ dental benefits and increased the cost of employee healthcare by $500 a year without any warning or consultation with the Union.

Hospital CEO Scott Berlucchi receives an annual salary of over $400,000.00 a year, while full-time Certified Nurses Assistants start out at $13.17 per hour. Workers at Auburn Community Hospital are committed to fight for a fair contract now.