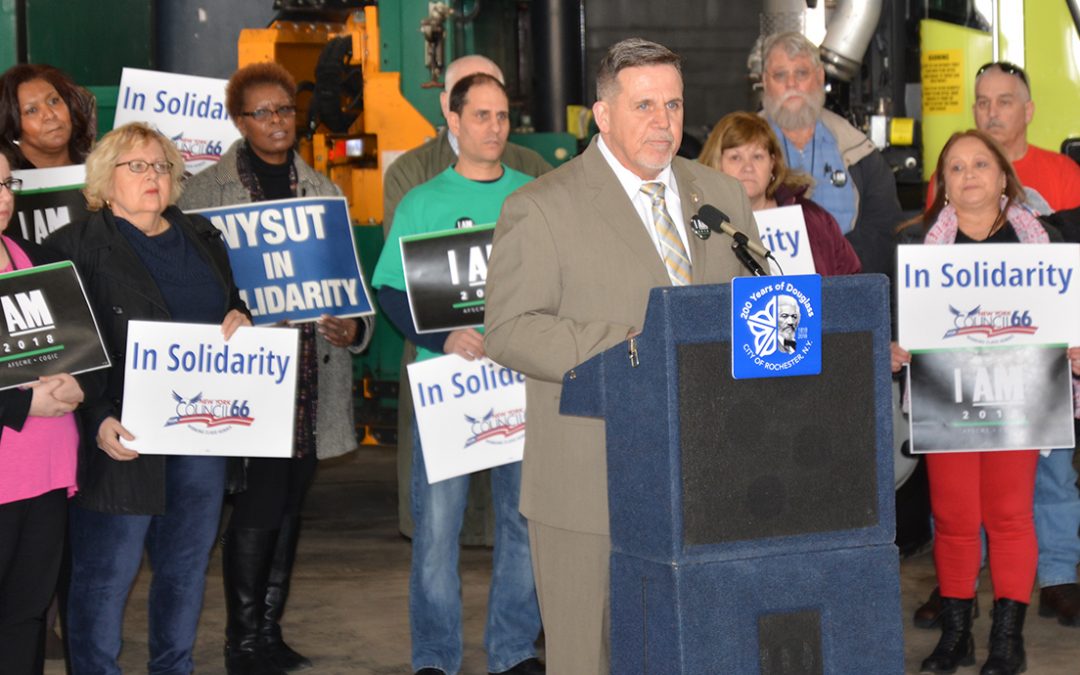 ROCHESTER – February 1, 2018 – The City of Rochester was one of the many municipalities that observed a nationwide Moment of Silence on February 1, 2018. The Moment of Silence honored Echol Cole and Robert Walker, two Memphis, TN sanitation workers who were crushed to death 50 years ago by the compactor of their garbage truck. Their deaths sparked the walk-out of 1,300 fellow sanitation workers, all members of the American Federation of State, County and Municipal Employees (AFSCME) Local 1733. That pivotal strike brought Dr. Martin Luther King Jr. to Memphis in April of 1968 to support the sanitation workers’ cause.

The Moment of Silence event held today in Rochester was co-sponsored by AFSCME Local 1635 and the City of Rochester. The anniversary was observed at the Mt. Read Operations Center in the Maplewood neighborhood, and was open to members of the public and all unions members in the region.

“I have always believed that the labor movement and the civil rights movement are two parts of the same struggle. The right to provide for your family free from discrimination on the job is an essential part of what it means to be an American worker,” said Bill Slocum, President of AFSCME Local 1635, which represents 1,300 non-uniformed employees at the City of Rochester. “Let us never forget the sacrifice of workers like Cole and Walker, as we look toward the day when all who work for a living will be treated with dignity and respect.”

“Labor built the middle class and labor continues the fight for the protections that all workers deserve,” Mayor Lovely Warren said. “Today, in a nationwide moment of silence, we remembered not only Echol Cole and Robert Walker, but the many workers who have died or been injured on the job. I stand in support of labor and all workers as we continue the fight for more jobs, safer and more vibrant neighborhoods and better educational opportunities.”

The Moment of Silence is part of a broader I AM 2018 campaign, jointly sponsored by AFSCME and the Church of God In Christ (COGIC). AFSCME and COGIC launched the I AM 2018 campaign to honor the Memphis sanitation workers and Dr. King., in observance of the 50th anniversary of the strike and the assassination of Dr. King on April 4, 1968. The I AM 2018 campaign is a grassroots voter education and mobilization campaign that will train thousands of activists to create change in their communities and carry on the legacy of Dr. King and the sanitation workers.

“In solidarity with those who have been treated unjustly be their employers, we must ask ourselves: are we dedicated to fighting for that proposition that all people are created equal?” asked Assemblymember Harry Bronson.  He continued: “In honor and in remembrance of those who participated in the Memphis Sanitation Workers’ Strike, I’ll simply answer with two words. I am.”

Dan Maloney, President of the Rochester-Genesee Valley Area Labor Federation, AFL-CIO, said, “Labor rights, Civil rights, Women’s rights, Human rights, are all part of the same struggle for social and economic justice. That is what the 1968 Memphis strike was all about: dignity, fairness, and creating a better life for workers and their families. The labor movement is and always has been on the right side of this struggle. We will continue the fight for social and economic justice in complete solidarity with all who are ready to build a better future.”

Nationwide, AFSCME locals, faith-based groups, municipal governments, public officials, civic groups and other organizations observed this Moment of Silence on February 1 with a variety of events in their respective communities. Participants also observed the passing of longtime AFSCME leader and progressive activist Paul Booth, who was a key strategist on the I AM 2018 campaign and the chief architect behind the Moment of Silence.

Bruce Popper, Vice President of SEIU1199, said, “We gather today to mark the 50th anniversary of the deaths of two Memphis sanitation workers which triggered the strike in which Dr. Martin Luther King, Jr. was killed.  We gather not solely to reflect on the past but to renew our commitment to Dr. King’s unfinished agenda – the campaign for economic equality. We face record poverty, income and wealth disparities, and a resurgence of racism in our nation, and like Dr. King, we intend to fight these evils until true economic justice is achieved.”

“I AM A MAN” was the slogan that the 1968 striking sanitation workers adopted to shine a light on their degrading working conditions and to assert their humanity. The I AM 2018 campaign will continue the unfinished work of confronting prejudice, poverty and advancing the freedom of all working people today.