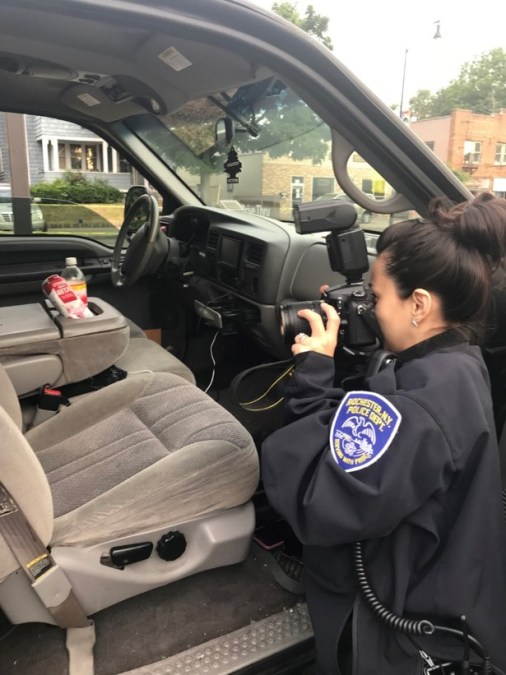 In a community where grieving families desperately look for answers to violence, there are people like Stephanie Mintz-Police Evidence Technician, Local 1635, tirelessly working to bring justice to victims.

Stephanie was raised in a family that was dedicated to helping people in crisis. Her grandparents and mother were EMTs. Yet, throughout most of her childhood, Stephanie thought she wanted to go in a different direction and become a teacher. Then, a 12th grade science teacher introduced her to forensics and opened a whole new world to her.

Stephanie followed this new passion into college and went to school for Applied Forensic Science with a concentration in Criminalistics. It was a ride-a-along her junior year of college that drew her to the City of Rochester. Eight years ago, she joined the Rochester Police Department Police Evidence Technician unit.

Evidence Technicians are called to work on the most serious crimes in our community, including home invasion robberies, fatal car accidents, child abuse crimes, shootings and homicides. They are responsible for crime scene management and evidence identification. They document, identify, collect and process evidence at crime scenes.

At the crime scene, the assigned technician can spend up to 8 hours or more collecting evidence. In one case, Stephanie’s colleague stayed at a crime scene for 17 hours straight until the work was completed. Between 250-700 photographs are taken by technicians at a homicide scene. They also collect fingerprints, DNA, blood, trace hairs, fibers, shoe prints, surveillance video, tire impressions, firearms, ballistic evidence, cell phones, vehicle forensics and any items that can potentially provide evidence.

Once technicians complete the crime scene evidence processing, their work is not over. They are also responsible for completing a technician and property custody report that documents all tasks completed on scene and any evidence collected. This amount of work requires real dedication.

Fingerprints lifted from homicide scenes are then evaluated, entered, and identified by a civilian fingerprint examiner. This intensive work has led to the direct identification and apprehension of possible suspects that were previously unknown to investigators. Evidence Technicians also provide bloodstain pattern analysis, give courtroom testimony and teach evidence collection procedures to police recruits during the academy.

Stephanie says the part the public misunderstands about her job is how arduous and time consuming this work is. Cases don’t get solved in “one hour like you see on CSI.”

One of Stephanie’s most well-known cases involved the kidnapping of two UR students. In a case of mistaken identity, two student athletes were kidnapped, tortured and held captive for 40 hours. The case received national attention and was featured in an ESPN documentary. Stephanie collected evidence in the house where the students were held captive.

She worked through the night collecting evidence.  “Evidence was everywhere.” She collected 65 items including masks, duct tape, fingerprints, ammunition and guns. She testified in court on the items she collected at the trial and was questioned by the four different defense attorneys for the defendants. Two of the defendants received a sentence of 35 years.

Stephanie says the best part of her job is her ability to use the science she loves to bring “justice to victims.” The most difficult part can be separating her emotions from some of the crime scenes. Stephanie always stays professional at a crime scene, but there are times when she spends hours investigating a homicide, then carrying the full weight of her work, goes home and has to adjust to her “regular” home life.

As many families are making new year’s resolutions for the year ahead, we must also remember there are families in our community looking for answers to the past. Police Evidence Technicians like Stephanie Mintz are behind the scenes painstakingly working to give these families resolution and justice.