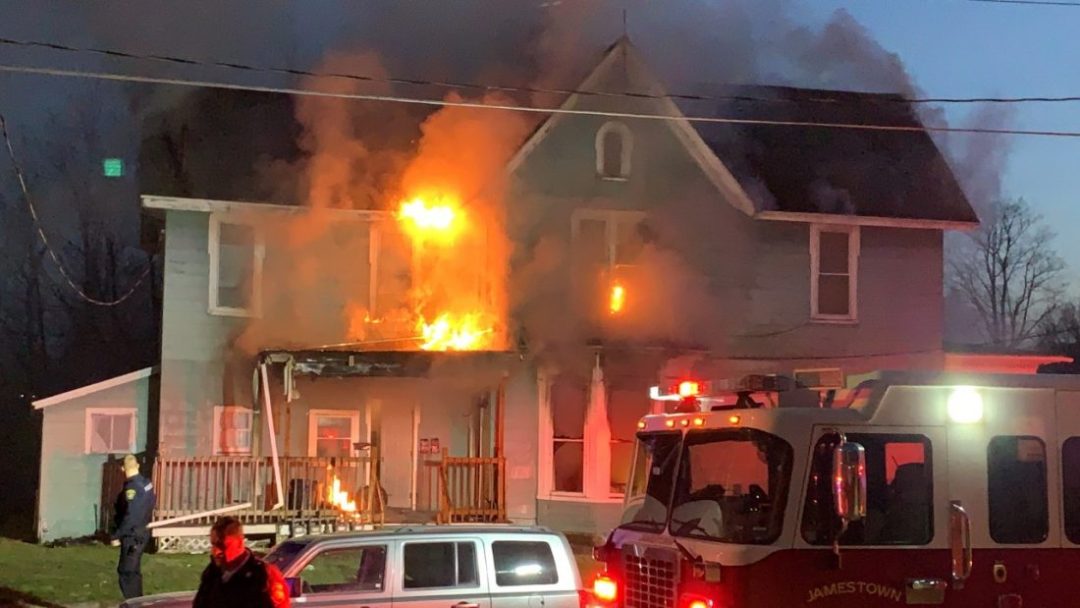 Photo by Eric Tichy  Flames are pictured coming from the Washington Street property shortly before 7 a.m. The blaze remains under investigation. (Picture courtesy of Observer Today)

On Tuesday, March 23, Joseph Pollaro an AFSCME Local 418 Equipment Operator began his morning shift. Rounding the corner on his way to the Jamestown City dumpsite, he noticed a woman in the street screaming into her phone.

After driving a few yards farther, he realized why. A house was engulfed in flames, and the whole front porch was on fire.

Pollaro, 59, a 15-year employee of the Jamestown Public Works Department parked his dump truck and hopped out to take a closer look.

Right away, he saw residents running down a staircase outside to safety from the second floor. That same staircase–only minutes later– was engulfed in flames.

Hearing screams, Pollaro ran around to the back of the house and saw two people hanging out of the window gasping for air. The back door was burning. There was no way out.

Thinking quickly, Pollaro told them that they would have to make the jump as the blaze began to fill the room where they stood. He said, “The only thing left to do was jump, so I told them to jump into my arms, and they did.”

“She wanted to leap headfirst. I told her to turn around feet first,” said Pollaro. ” I caught her, and we both hit the ground. I cushioned the fall the best I could.”

After that, he caught the man. They also fell to the ground together.

Pollaro said, recounting those moments, “The good lord put a golden wing on my shoulder. It protected me, and it protected them. There was no way that I could’ve done that by myself.”

“We go to work every day to help the public. No matter what, we’ve done it all to help the community every chance that we get. This is what we do. I am thankful I was there at the right time,” he said.

After ensuring the two people would be ok and in the care of an ambulance, Pollaro hopped back in his truck and completed his shift.