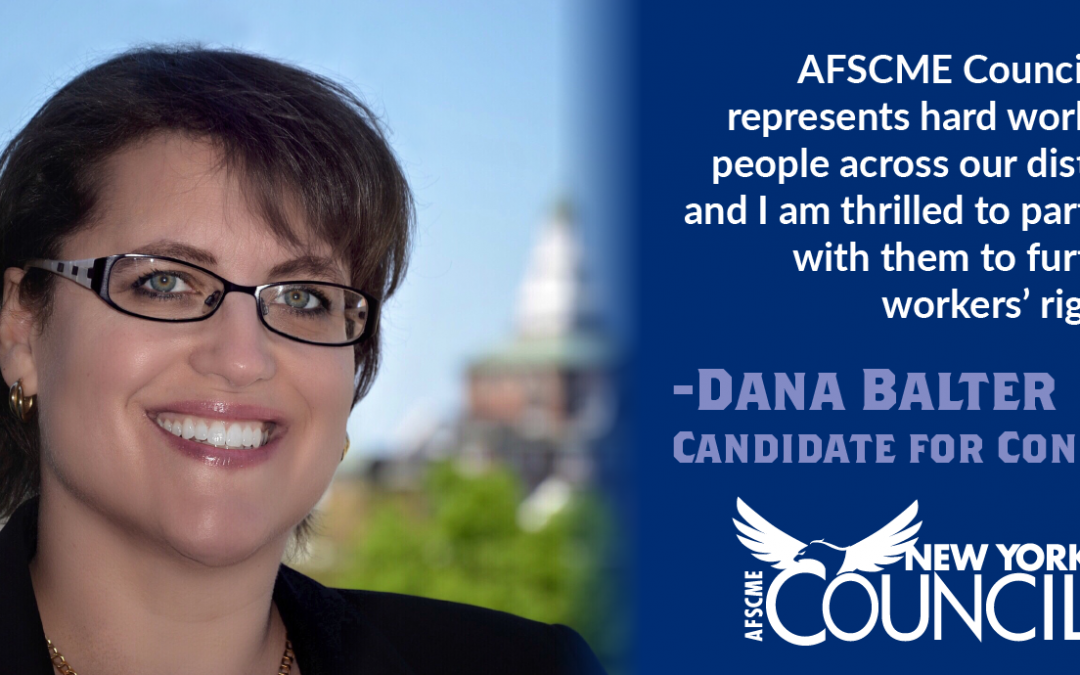 During her interview with members of AFSCME Council 66 in Syracuse, Balter pledged to protect the right to bargain for better wages, benefits, and working conditions. She supports increasing the federal minimum wage, opposes privatizing public education, and will vote to rollback tax giveaways to millionaires and big corporations.

“Unions give working people the freedom to provide for their families, care for their loved ones, and retire with dignity,” said AFSCME Council 66 President Dan DiClemente. “Dana Balter is the only candidate in this race who understands the issues that workers are facing and she will fight for us.”

Dana Balter said, “I am so honored to have the endorsement of AFSCME Council 66. The Council represents hard working people across our district and I am thrilled to partner with them to further workers’ rights. The ability to collectively bargain means working families can continue to guarantee safe, good jobs that benefit people all across the country and promote prosperity for everyone. I am thankful to have had the opportunity to speak with members of the Council and I look forward to more conversations about what we can do to make this country a better place for workers.”

Dana Balter also spoke out against the Supreme Court’s recent decision in Janus v. AFSCME, in which activist judges sided with corporations over working men and women. Her opponent, Congressman John Katko, did not reach out to the Union to seek our endorsement.

Steve Barnum, President of the City of Syracuse Employees Union (AFSCME Local 400) explained, “Workers want elected representatives like Dana who will stand up for good jobs and investments in vital public services. When he voted to take away healthcare from thousands of Central New Yorkers while giving huge tax breaks to the wealthy few, Congressman Katko turned his back on working families.”

“In these challenging times for working people, it’s crucial that we come together and support candidates who share our priorities and our vision for a fairer economy,” declared AFSCME Local 3124 President Maureen Coleman. “Dana Balter clearly recognizes that unions improve our communities when we negotiate for better wages and benefits. She stands for solidarity and we proudly stand with her.” AFSCME Local 3124 represents over 300 workers at Auburn Community Hospital.

The general election for state and federal offices, including member of Congress, will be held on Tuesday, November 6. The New York 24th Congressional District includes the cities of Syracuse, Auburn, and Oswego.