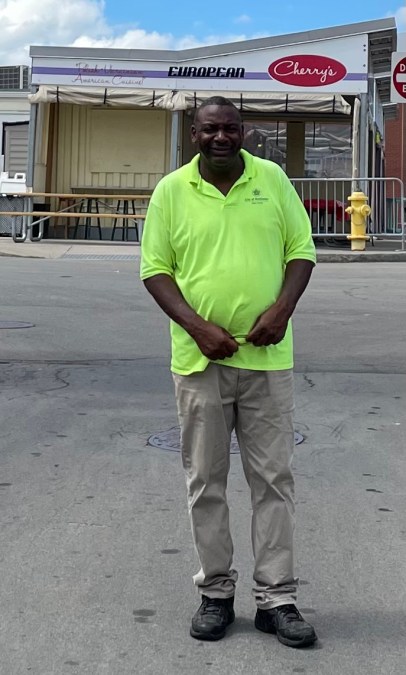 AFSCME 1635 member, Brian Haygood, is a lifelong Rochester resident dedicated to the Rochester community. He is passionate about his work for the City of Rochester as the Crew Chief at the beloved and wildly popular Rochester Public Market.

He grew up in the city and graduated from East High School and continues to live in the city — in the same neighborhood for the past 24 years. His family has always had a deep commitment to public service. His grandfather worked for the City of Rochester environmental services and his mother and brother both retired from the City of Rochester after decades of service.

About three-and-a-half years ago, Brian decided to follow in his family’s footsteps and took a job with the City, performing downtown cleanup on a seasonal, temporary basis. He took a chance with the job, hopeful that a full time permanent position would open up.

When the opportunity to work at the Rochester Public Market presented itself he applied right away. When he was young, Brian’s father would send him to the public market to buy meat and bacon for the family. Now he helps maintain a place that was part of his experiences growing up, also a nostalgic location for many Rochestarians.

As crew chief, he supervises two staff persons and maintains the grounds of the public market (a space utilized by thousands of community members every week).  When asked about the market he enthusiastically said: “I love it” and “I love the people!” He really enjoys talking with the vendors and helping “uplift” them in their work.

He appreciates that when he takes care of broken glass, plugged sinks, or snow piles, he’s helping make vendors and customers happy. Brian sees himself not only as someone in the role of ensuring a well maintained, safe space for everyone, but as a public relations representative for the market. He feels that building and maintaining relationships helps him address issues related to public market maintenance and safety quickly.

Brian shared that he had two work experiences in particular that stand out for him at the market. In January of this year, there was a huge snowstorm and he was the only staff member able to come in.

City snow removal crews were too busy plowing city streets to be able to help at the market. Therefore, Brian had to plow the entire market by himself.

He worked long hours alone during the snowstorm making sure that businesses in the market were accessible to employees and customers. On another occasion, he observed a car driving at a high rate of speed through the market and noticed that a pedestrian didn’t seem to see the quickly approaching vehicle.

Brian instantly reacted and used his arms to quickly pull the pedestrian back away from the vehicle that most likely would have hit him had Brian not taken fast action. The pedestrian was grateful.

Brian believes that people come to the market for people watching, good food and good deals and appreciates the long history of the market. He also believes that the market is successful due to the teamwork among market staff.

He works extensively with long time Public Market director Jim Farr and calls Jim “phenomenal.” Brian believes that much of the growth of the market is due to Jim’s passion and vision for the market and the support he provides to market staff.

Brian is very excited about the future of the Rochester Public Market and excited to play a role in the success of a space that will bring joy to current and new generations of Rochesterians. The impact of Brian’s work will leave an imprint on the memories of thousands of public market goers of all ages.