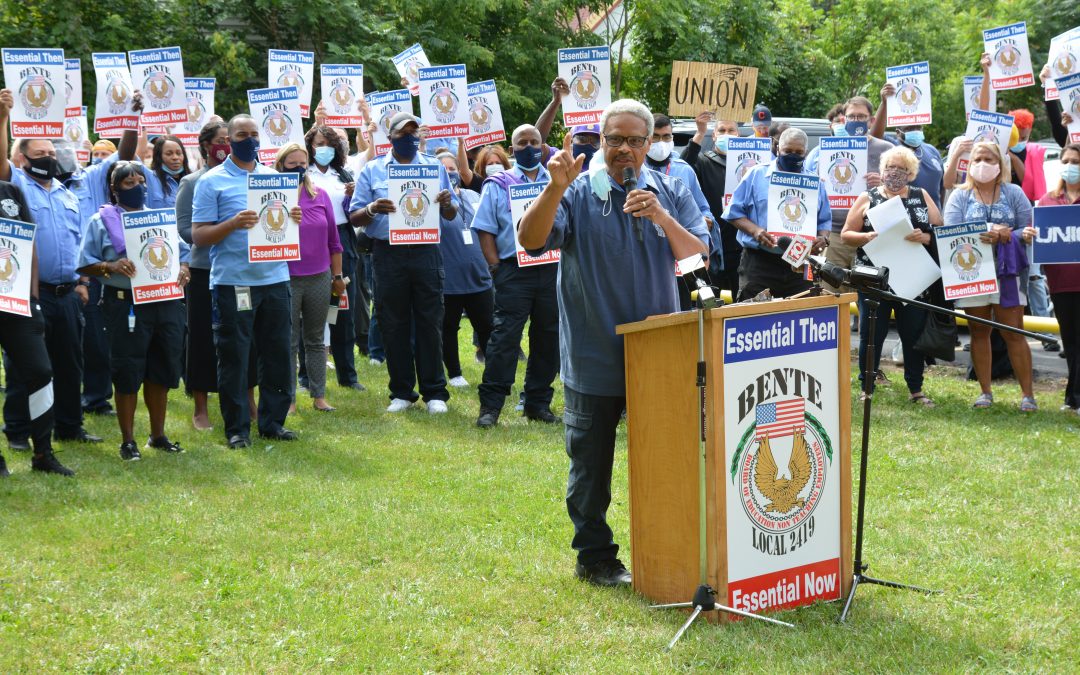 After weeks of advocating for their essential jobs, hundreds of BENTE/AFSCME Local 2419 members staged a press conference and rally urging the Rochester City School District (RCSD) Board of Education and Superintendent to vote “no” on proposed cuts that would result in over 200 layoffs.

RCSD Superintendent Lesli Myers-Small recently reversed the District’s decision to follow a hybrid model of reopening, instead opting to implement all-remote instruction for the first ten weeks of the school year.

In July, the District had submitted a plan for reopening to the state and committed to join all of the area’s suburban districts in offering a hybrid instruction model to the more than 25,000 students that the District serves. The RCSD, which receives seventy percent of its funding from New York State, cited the financial strain of the pandemic and a lack of federal stimulus funding as the reason for the proposed cuts.

The union has taken a three-pronged approach to keeping its members employed while serving the community: ensure that elementary schools and cafeterias remain open for remote learning; deliver hot meals to the student’s doorstep five days a week; expand outreach efforts to RCSD students through phone calls and home visits.

The RCSD had previously proposed that children congregate at City Recreation Centers, as opposed to schools. However, earlier this month, BENTE/AFSCME submitted a plan entitled “Essential Then, Essential Now” to the Superintendent and the Board of Education, outlining the essential roles that support staff workers would play if the District decided to use school buildings as learning hubs. The proposal also illustrated a cost savings to the RCSD through unfilled vacancies and the elimination of overtime and substitute costs.

Cuts to the RCSD workforce would not only threaten support staff members – an overwhelming number of whom live in the City and send their children to city schools – but also the students who rely on their services. The presidents of AFSCME Council 66 affiliate locals, along with representatives from our International Union, AFSCME (American Federation of State, County, and Municipal Employees), have been actively lobbying in Washington and Albany for additional funding for local governments and schools.

An absence of state and local government aid would be devastating to the public services that the RCSD provides, and BENTE/AFSCME is advocating for the District to hold on any potential cuts until after Congress reconvenes in September.