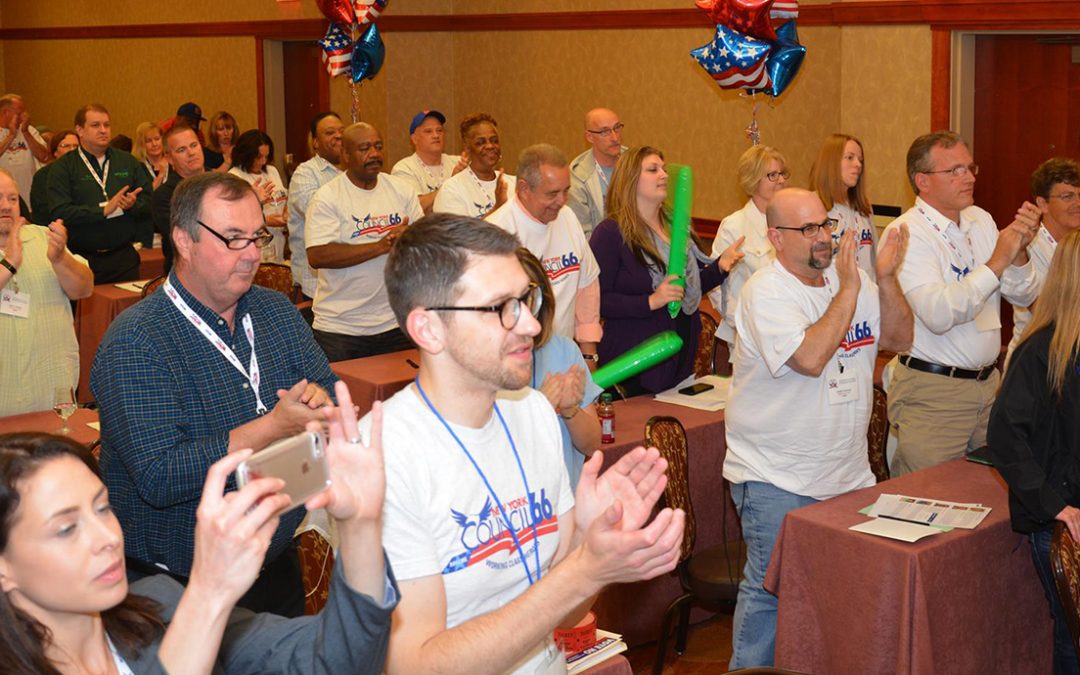 Union members and leaders from Council 66 gathered in Niagara Falls in June to chart a new course for the Union. Over 100 delegates from across Upstate New York and the Hudson Valley attended the two-day convention held at Seneca Niagara. This event marked the 25th Biennial Convention in which members joined together to set the Union’s priorities for the next two years.

Reformers elected to the Executive Board

Among the many highlights of the Convention, Dan DiClemente was unanimously elected as President of Council 66 along with a full slate of Officers and Executive Board members who are determined to grow the Union.

In his opening address, DiClemente laid out an ambitious agenda. “We want everyone to be proud of the Council they belong to, not ashamed of it,” he said. “I don’t want us to just change for the better; I want us to be the best.” DiClemente explained what is at stake with the US Supreme Court’s impending “right to work” decision, which could severely undermine our right to collectively bargain for better wages, benefits and working conditions. “You live under the contract that your Local negotiates, and if that contract is gone, then your health care, your pension, and your wages are at risk.”

President DiClemente was elected alongside a new generation of reformers who will lead the Council for the next four years. Vice President Bill Slocum praised the result of the election. “Each of the members of our new Executive Board was elected here with the full support and confidence of the delegates. I’m proud of the work we started, and our members leave this Convention stronger and more united than ever before.”

Elissa McBride, Secretary-Treasurer of AFSCME, gave the keynote address of the Convention. McBride, the second highest-ranking Officer of AFSCME, focused her remarks on the challenges facing the Union, including “right to work” and the Constitutional Convention referendum in New York State.

McBride highlighted the AFSCME Strong program, which is an organizing campaign that promotes individual discussions with every member to identify what is important to them. She explained, “AFSCME membership engagement is about more than just ‘right to work’ – it’s about people power, it is about growing the Union, and being able to stand up for the Union in a changing political environment and share our stories of public service.” Over 600,000 one-on-one conversations have already been held with AFSCME members across the country.

She praised the work being done by the new Executive Board to change the direction of the Council. McBride said: “This is the beginning of a beautiful relationship between Council 66 and AFSCME, and it’s wonderful to be part of this partnership. Together, we are stronger at every level.”

Throughout the Convention, speakers addressed the two biggest challenges facing our union in the coming year: “right to work” and the Constitutional Convention (Con-Con) referendum.

In his speech to the delegates, AFSCME NY Area Representative John English explained how “right to work” could undermine our right to collectively bargain for better wages and benefits. “That’s the real danger of a ‘right to work’ environment,” English warned, “This is a plan to financially knee-cap unions.” AFSCME International has been providing membership engagement training to interested local affiliates.

During his speech, AFSCME New York’s Political and Legislative Director Brian McDonnell urged delegates to become politically active in their communities. “If you think you don’t need to be involved in politics at the local level, you’re wrong,” McDonnell said, “And if you’re not at the table, you and your members are going to be on the menu.” Courtney Brunelle, AFSCME NY Political Coordinator, explained what is at stake with the Constitutional Convention referendum on the ballot this November. If voters pass this referendum, lobbyists and politicians in Albany would be able to rewrite the state Constitution, which already guarantees members’ pensions and right to collectively bargain. That is a risk, Brunelle said, that working families cannot afford to take.